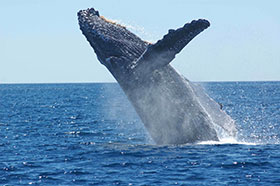 It’s not easy to do pregnancy tests on whales. You can’t just ask a wild ocean animal that’s the size of a school bus to pee on a little stick. For decades, the only way scientists could count pregnant females was by sight and best guesses based on visual characteristics. For the last several years, researchers have relied on hormone tests of blubber collected via darts, but the results were often inconclusive (not negative or positive), and researchers couldn’t confidently say if the animal was pregnant or just ovulating.

Research from the National Institute of Standards and Technology (NIST) and Australia’s Griffith University points to a weakness of that testing and provides a new method for hormone testing that offers better results.

“Previous tests only looked at progesterone in blubber samples,” said Ashley Boggs, a research biologist at NIST who helped to develop the new tests. “We found that androgens, and especially androstenedione in combination with progesterone, are much more likely to be a reliable marker of pregnancy.”

Being able to determine whale pregnancy is important because it offers insight into the health of a population. Whales are sensitive to changes in their environment and can serve as early warning signals that something is amiss, including details about the health of the food web, the impact of ocean noise, and the levels of contaminant exposures. The Marine Mammal Protection Act was enacted in 1972 to protect whales, and since that time stock assessments and protections have been carried out by the National Oceanic and Atmospheric Administration (NOAA), including data on pregnancies. That’s why NOAA came to NIST to try to advance hormone measurement technology for marine mammals.

In recent years, humpback whale numbers have increased dramatically in many places, although they are still considered endangered. The animals’ large size makes it difficult to count or study them using traditional identification methods. Like most protected whales, this species cannot be held in captivity , and most of the information about them must be gained through observation in the wild. But humpbacks can serve as an indicator species for other, more endangered large whales, and by developing bioanalytical measurement techniques for these species that are doing well, scientists can confidently apply them to other, more protected species.

“Up to this point, most measurements had been conducted using immunoassays, which require a ‘one at a time’ approach to hormone measurements,” Boggs said.

“We know that hormones act together in suites to cause large physiological changes. If you focus on only one hormone at a time, you might miss the major hormone of interest or simply run out of money or samples.”

The research team studied female humpbacks along the east coast of Australia during two stages of migration. Fifty-two individuals were randomly sampled before reaching the calving grounds in June/July (austral winter) and again after departing the calving grounds in September/October (austral spring). Before reaching the calving grounds, only one had a high concentration of progesterone, the hormone that has previously been used as an indicator of pregnancy in this species. This number seemed too low to be reliable. The evidence indicated that the animals’ hormone profiles change in late pregnancy, since multiple calves were seen later.

Finding chemical indicators for pregnancy in marine mammals is very different from finding them in humans, where a protein hormone called human chorionic gonadotropin (hCG) is detected right after the implantation of the embryo. Other protein hormones are difficult to use as a standard indicator for pregnancy because their levels vary from one species to the other.

Previous whale reproductive research had relied on the measurement of the hormone progesterone using a test known as enzyme-linked immunosorbent assay, or ELISA. ELISA has been the “go to” assay for years, but NIST scientists have determined that not all species rely on the same hormones during pregnancy, and in addition, some species’ hormone levels exhibit significant shifts during different phases of the gestation process.

NIST researchers realized that a chemical analysis technique called mass spectrometry, which detects compounds based on their masses, would potentially allow the measurement of many hormones simultaneously and could help biologists to understand which hormones can be found at different stages of pregnancy.

from NIST and Griffith University scientists allowed for gathering a simultaneous measurement of 11 steroid hormones in each sample of whale blubber using liquid chromatography tandem mass spectrometry. The technique identifies hormones based on molecular size and mass rather than attachment of the hormone to an antibody (as in the current method), ensuring higher accuracy and selectivity.

“By casting a wider net and looking for more hormones, we were able to get a better set of biomarkers,” said Boggs. The same technique will also likely be applicable to other species including North Atlantic right whales, which are dying at alarming rates and considered to be a species in peril. Boggs noted that correct timing could also improve the tests’ accuracy rates.

“Criteria will change depending on how far along the pregnancy has progressed,” she said. “In some species, progesterone drops off toward the end of pregnancy. And even closely related species can have very different hormonal profiles. Each test would need to be tailored to the species to be accurate, but the beauty of the mass spectrometry method means you don’t have to know which hormone is dominant before you start looking. You can look at them all.”   back...