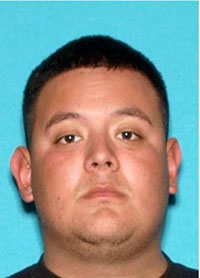 The U.S. Marshals – Pacific Southwest Regional Fugitive Task Force is offering a reward of up to $5,000 for information leading to the capture of a man suspected in the shooting of a police officer in La Puente, California, Aug. 10.

Jose Ortega, 25, is alleged to have been involved in the shooting of a detective assigned to the Los Angeles Interagency Metropolitan Police Apprehension Crime Task Force (L.A. IMPACT) in La Puente, California. The U.S. Marshals have elevated the investigation to major case status.

Ortega is a Hispanic male, with black hair and brown eyes. He stands 6 feet 1 inches tall and weighs approximately 290 pounds. He should be considered armed and dangerous.

Anyone with information on Ortega's location should call the U.S. Marshals Service at 1-877-WANTED2 (926-8332). Anonymous tips may also be submitted via the U.S. Marshals Tips App, and to the Los Angeles County Sheriff's Department by calling 800-222-TIPS or www.p3tips.com/lasd.

The U.S. Marshals Pacific Southwest Regional Fugitive Task Force - LASD Major Crimes team is made up of Detectives with the LASD Major Crimes Bureau - Fugitive Taskforce and Inspectors with the United States Marshal Service. They are one of 20 teams comprising the fugitive task force in a collaborative effort by southern region law enforcement agencies to apprehend fugitives from justice. The incident is being investigated by the LASD Homicide Bureau.   back...