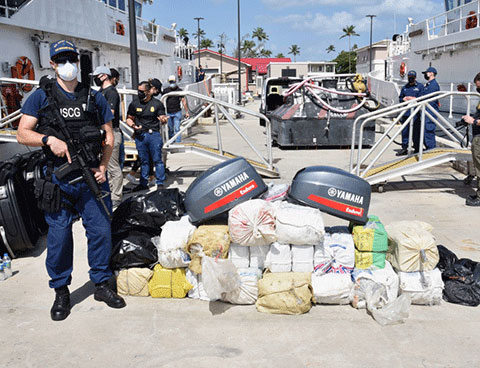 The Coast Guard Jayhawk aircrew successfully stopped the vessel. Following the interdiction, it was discovered one of the suspected smugglers was injured and needed to be medevaced. A Coast Guard Air Station Borinquen MH-65 Dolphin aircrew transported the person to a hospital in Puerto Rico to receive further medical care.

The three suspects are two men and a woman, Dominican Republic nationals, who are facing possible federal prosecution on drug trafficking criminal charges. Department of Justice partners in the U.S. Attorney’s Office for the District of Puerto Rico are leading prosecution efforts in this case.

“Stopping illegal drug trafficking vessels like the one interdicted Saturday is inherently dangerous and involves a high level of skill and risk,” said Capt. Gregory H. Magee, Commander of U.S. Coast Guard Sector San Juan. “These vessels represent a serious threat to the Caribbean region. The professionalism of the interdicting crews and strong partnerships with federal, local and regional law enforcement led to the apprehension of three smugglers and seizure of a major drug shipment in our shared resolve to protect the people of Puerto Rico and the U.S. Virgin Islands from this threat.”

“This Organized Crime Drug Enforcement Task Force investigation is one of several cases targeting Transnational Criminal Organizations operating out of South America, Dominican Republic, and Puerto Rico,” said A.J. Collazo, DEA Caribbean Division Special Agent in Charge. “DEA will continue to work alongside other federal agencies as more seizures like this one can be expected.”