As described in the seizure documents, all 27 domains were being used in violation of U.S. sanctions targeting both the Government of Iran and the IRGC. Four of the domains purported to be genuine news outlets but were actually controlled by the IRGC and targeted audiences in the United States, to covertly influence United States policy and public opinion, in violation of the Foreign Agents Registration Act (FARA). The remainder targeted audiences in other parts of the world. This seizure warrant follows an earlier seizure of 92 domains used by the IRGC for similar purposes.

“Within the last month we have announced seizures of Iran’s weapons, fuel, and covert influence infrastructure,” said John C. Demers, Assistant Attorney General for National Security. “As long as Iran’s leaders are trying to destabilize the world through the state-sponsorship of terrorism and the taking of hostages, we will continue to enforce U.S. sanctions and take other legal steps to counter them.”

“Today's 29 seizures are another important step against Iran's worldwide disinformation campaign,” said U.S. Attorney Anderson. “This work will continue. We cannot allow Iran's attachment to fake news to overtake our commitment to the rule of law.”

“The FBI is aggressively investigating any evidence of foreign influence and the unlawful spread of disinformation by hostile nations. Today, we seized 27 additional domains that Iran’s IRGC was illegally using in attempt to manipulate public opinion in other countries, including the United States,” said FBI Special Agent in Charge Craig D. Fair. “Thanks to our ongoing collaboration with Google, Facebook, and Twitter, the FBI was able to disrupt this Iranian propaganda campaign and we will continue to pursue any attempts by foreign actors to spread disinformation in our country.”

The seizure warrant, issued on Nov. 3, 2020, describes how the 27 seized domain names were being operated in violation of federal law. Control of the domains by the IRGC violated the International Emergency and Economic Powers Act (IEEPA) and the Iranian Transactions and Sanctions Regulations (ITSR), which prohibit U.S. persons from providing services to the Government of Iran without a license. Further, the United States has found that the IRGC has provided material support to a number of terrorist groups, including Hizballah, Hamas, and the Taliban. As such, the Department of the Treasury’s Office of Foreign Assets Control (OFAC) added the IRGC to its list of Specially Designated Nationals, imposing additional licensing requirements. As described in the seizure documents, the 27 domains were registered with U.S.-based domain registrars and used top-level domains owned by U.S.-based registries. Neither the IRGC nor the Government of Iran obtained a license from OFAC prior to using the domain names and obtaining services from the U.S. providers.

In addition, four of the 27 domain names, “rpfront.com,” “ahtribune.com,” “awdnews.com,” and “criticalstudies.org,” were also seized pursuant to FARA. FARA establishes a registration, reporting, and disclosure regime for agents of foreign principals (including foreign governments and their agencies) so that the U.S. government and the people of the United States are informed of the source of information and the identity of persons attempting to influence U.S. public opinion, policy, and law.

FARA requires, among other things, that persons subject to its requirements submit periodic registration statements containing truthful information about their activities and the income earned from them. Disclosure of the required information allows the federal government and the American people to evaluate the statements and activities of such persons in light of their function as foreign agents. Here, the four domains purported to be independent news outlets, but they were actually operated by or on behalf of the IRGC to target the United States with pro-Iranian propaganda in an attempt to covertly influence the American people to change United States policy concerning Iran and the Middle East.

These domains targeted a United States audience without proper registration pursuant to FARA and without notifying the American public with a conspicuous label that the content of the domains was being published on behalf of foreign principals, the IRGC and the Government of Iran.

Visitors to the sites received the following message: 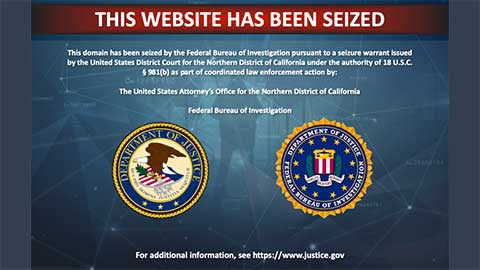 This seizure was investigated by the Federal Bureau of Investigation.   back...